The Ultimate Guide to Food in Buenos Aires 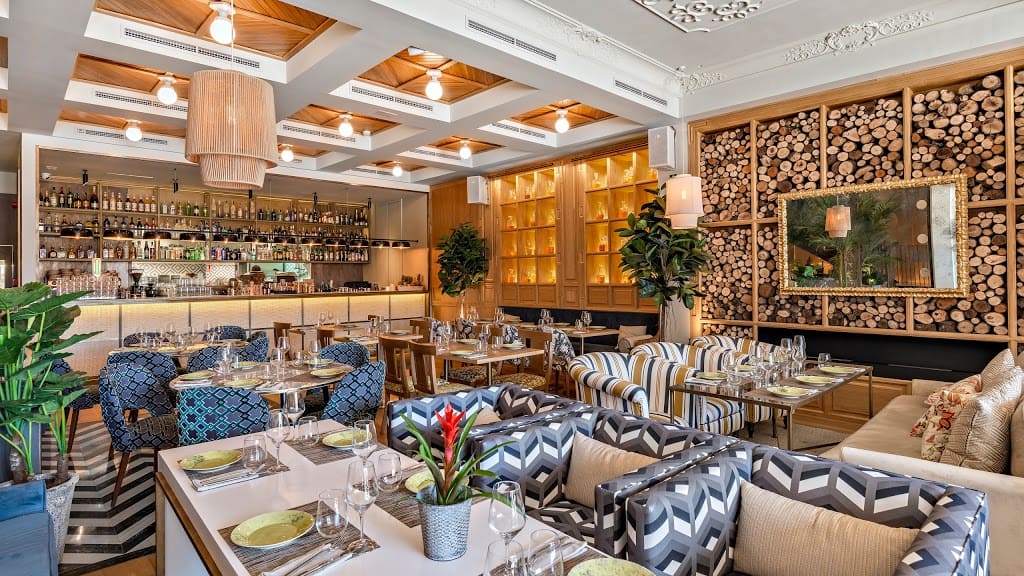 If there’s one thing in this world we know for certain, it’s that the food in Buenos Aires is incredible.

In just a short read, you’ll be something of an expert on this topic yourself. In this Buenos Aires food guide, we’ll be discussing everything from Argentine wine to exciting foreign influences and our favourite Argentian dishes along the way!

Whether you’re coming here on a little holiday, for business, to host an event, to attend an event, or just curious, there are stacks of vital information on the food in Buenos Aires down below.

But fair warning, as well as detailed descriptions, there are photos too, so if you’ve not had your lunch yet or you’re about to go to the supermarket, maybe bookmark this read for later!

The Spirit of Argentinian Cuisine

Argentinian cuisine is a curious blend of influences. You, of course, have the influence of the indigenous people of the country. Then you have the Mediterranean influences – primarily from Spain – that have been arriving since the Colonial period.

One of the biggest influences the Spanish had was cattle. They were the first to introduce the animal to the country. And now, as you might know, Argentinian food is perhaps most synonymous with beef. And rightly so. The average person consumes over 100kg of the stuff every year.

This leads us to Asado. It’s a word that is synonymous with Argentine cuisine – and perhaps typifies their relationship with food best. Asado is both the technique of barbequing food, as well as the communal social experience of eating food itself. It’s a big part of the identity and something you have to experience while you’re here!

So yes, food in this country is an expression of warmth, love, and togetherness. Moreover, there is a heavy emphasis on homemade cuisine too.

As for the food in Buenos Aires, it’s very much in line with that of the wider Argentine cuisine. Breakfasts are light, lunch is usually the biggest meal of the day, and dinner is late in the evening.

Now we’re going to dive into some of these ideas further, with 16 examples of our favourite foods in Buenos Aires!

So, the obvious place to start for a Buenos Aires food guide is breakfast, right? Your first meal of the day. And in Argentina, it has to be a pastry. There are two main staples you’re going to have to try.

Firstly, you have Facturas. These are typically small pastries that are covered in sugar and usually filled with dulce de leche (sweet caramel milk paste), custard, or jam. Alternatively, you can have it without any filling at all.

Then, there’s medialunas. The irresistible hybrid between a brioche bun and a French croissant. They’re made from several layers of a sweet and rich dough made from butter and eggs. What makes them really stand out though is the subtle tastes of vanilla and lemon.

You can find these two treats in a panaderia (otherwise known as a bakery). They’re everywhere. Just walk outside your hotel, and you’ll find one right away! And to fit in like a local, take your pastry with mate tea or a coffee (more on the drinks later though!)

Now, here we go, the main event of our Buenos Aires food guide, so to speak…

The first main we’re going to talk about is Faina. It’s a classic Argentinian dish, a Latin American take on Neopolitan pizza.

What makes the Faina a Faina is the thick crusts, the light use of sauce, and the massive amounts of cheese used. The toppings range from olives to chilli flakes, similar to a traditional pizza.

These delights are made from chickpeas and offer a crunch. But the most surprising thing is that locals like to place them on top of traditional pizzas and eat them together!

If you like schnitzel, then you’ll love this next featured food in Buenos Aires: Milanesa. Here we have thin cuts of meat, breaded and deep-fried.

So, much like the Italian Veal Milanese. But what makes this a decidedly Argentinian dish is how it’s served. Because after it’s fried, it’s topped with a layer of tomato sauce, and then covered in melted mozzarella.

And the best part – in the humble opinion of this Buenos Aires food guide – is that it’s usually taken with french fries and potentially a fried egg (if you desire).

There are two main elements that make Argentine steak so popular. Firstly, the cattle here are grass-fed and free of chemicals. And secondly, as per the Asado cooking technique, the cuts of beef are seared with fire to lock in the flavours, leading to more tender meat.

The best way to experience this sensational Argentinian dish is at a local parrilla (steak house). Once there, make sure to order your preferred cut with hand cut-fries, chimichurri, a fried egg, grilled vegetables, and cheese.

It’s not just pizza and Milanese where the Italian immigrants have had their influence on Argentine cuisine. No, not at all. Our third Italian influence in this Buenos Aires food guide is pasta.

There are loads of cool speciality pasta shops in the city. There is a big supply and demand for fresh stuff, and the quality is high. Plus, you can buy pasta here in all the variations you’ve come to know and love, like, spaghetti, linguini, gnocchi, cannelloni, and a particular favourite food in Buenos Aires, ravioli!

Now it’s time for the snacks and street food in Buenos Aires. The stuff for in-between meals and for when you’re looking to do some culinary exploration!

For all you sandwich lovers out there, Argentine cuisine won’t disappoint you. Because up next, we have an icon of Buenos Aires street food, the Choripan.

The main element of this beauty is chorizo, pan (bread), and chimichurri! You’ll find it everywhere, from food trucks to coffee shops and even restaurants. This is such a popular bit of food in Buenos Aires that there’s even an annual festival dedicated to it!

Now, we all know that empanadas are a uniquely Argentinian dish. These beauties are enjoyed all over Latin America. However, they have their own unique style here in Buenos Aires.

As you might know, these are pastries folded into parcels that are fried or baked. Your usual fillings are meats and cheeses. But we wouldn’t be writing a respectable Buenos Aires food guide if we didn’t recommend humita as a filling. A sweetcorn-like addition from the northwest of the country.

Now, as we said, dinner will likely be served late here. So during the day, you’re going to need a snack. Or as the locals call it, a media tarde or merienda.

You can have more of the breakfast pastries we mentioned in the breakfast section. However, another popular food in Buenos Aires is tostadas con Jamon y queso (tostadas with ham and cheese).

And, just like breakfast, you can enjoy this classic Argentinian dish with coffee or tea. Or… maybe, seeing as it’s later in the day, you might want to have it with a local beer? (Again, more on that in the drinks a little further down!)

So, this is the part of our Buenos Aires food guide for those that have a sweet tooth. And friends, the capital of this fine country won’t let you down!

A classic Buenos Aires snack is Creamy Haldo, which is Argentinian ice cream. What makes it unique is that it has to be made from whole natural milk, made thick and creamy.

Another icon of Argentine cuisine is Alfajores. These sweets are a real national favourite. They’re made from two cornstarch biscuits glued together with a sweet caramel paste. You’ll often find them covered with chocolate or coconut and sugar powder.

They’re eaten throughout the day and are highly addictive, typically drunk with tea or coffee. And, fascinatingly enough, they come all the way from the 16th century!

Now, we did promise this section was coming. Because, after all, you do need something to wash down all this food in Buenos Aires. So let’s explore what’s on offer!

The national drink of Argentina is wine. They’re the fifth biggest wine producer in South America and the fifth largest in the world.

The superstar of Argentine wine is Malbec, a variety originating from the Bordeaux region in France. However, the Malbec production here has surpassed that of France.

The Malbec of Argentine wine is typified by its deep, dry, medium acidity and bold inky colour. As for regional variations within the country, it all boils down to climate, with warm weather producing higher alcohol Malbecs and cooler climates creating wines with high acidity.

The flagship white in Argentine wine has to be Torrontés, though. It’s a variety that is indigenous to Argentina herself. They’re best drunk young and are known for their fruity and acidic character traits, with flavours of apricots and honeysuckle being regular tasting notes.

And for those hunting down something stronger – say between 40 & 45% – you might be looking for fernet. Argentinians collectively consume up to 25 million litres of the stuff every year. It’s similar to an amaro with a bitter and aromatic taste; made from delights such as myrrh, rhubarb, chamomile, aloe, saffron, and grapes.

Or, if you’re not in the mood for alcohol, then you’ll want to try Yerba Mate. It’s a bitter tea that hails from the northeast of the country. This is a tradition from the indigenous population that is an iconic part of the cultural fabric of food in Buenos Aires.

And finally. Our last recommendation. If you’re more of a coffee person and you want to drink it like the locals, then ask for a Café Con Leche. It’s half espresso and half steamed milk. It’s typically served as part of a special breakfast meal that includes a cup of orange juice, croissants, and medialunas (the Argentinian brioche-croissants hybrids we mentioned earlier).

And that, folks, is a wrap, our ultimate guide to food in Buenos Aires. We hope you’ve enjoyed our exploration of Argentine Cuisine. We’ve covered everything from snacks to sweets, mains, Argentine Wine, and everything in between.

Now that you’re sufficiently convinced that there’s stuff here you need to eat. The next thing to do is book a fantastic venue in Buenos Aires. Just have a look at our selection. We’ve got something for everyone. Plus, we have an intuitive filter system and streamlined booking services. It’s as simple as that.

And before you go, here’s another bit of expert advice to sink your teeth into. Our ultimate guide to team building. There you’ll learn that it’s not just the tradition of Argentine cuisine that brings people together! 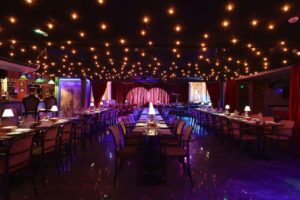 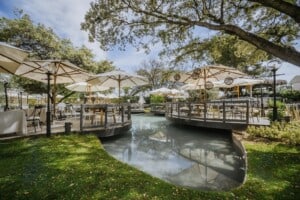 The Ultimate Guide to Event Branding in Buenos Aires